Of a Mysterious Voodoo Town
by Mora 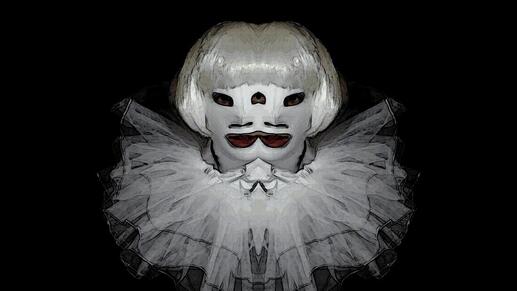 Once upon a time there was a lonely traveler who dreamt of seeing the entire world. He's already been to many places and seen a lot of beauty and sadness, but now he was approaching a city of which he heard more stories than of any other place in the world. Most of them were about either magic or music. Traveler was intrigued by those tales, but the legend that interested him the most was the one about the queen of ancient vodoo magic who ruled this town many years ago. There were rumors that even now, long after her death she still occasionally visits a few chosen houses in the black magicians' neighborhood. Her favourite house belonged to a man known as the nightmare king. So the traveler was dying to meet him despite the multiple warnings he received from the locals.

Surprisingsly, the infamous nightmare house turned out to be a small green wooden building hidden behind some tall trees. The master of the house, a scrawny middle-aged pale man, welcomed him.

- Dear sir, forgive me for intruding, but i'm hoping to meet the great voodoo queen, and i've been told that this is the place to find her.

The man gazed at him coldly:

- Indeed it is true, she tends to visit my modest house, but not everyone who seeks her is granted a meeting. If you manage to stay under my roof for three nights without being scared away, she might show herself to you.

Traveler agreed without a doubt. he didn't believe that after years of roaming the world anything could scare him. The nightmare king had friendly cat and dog, and the house itself looked very average if a bit worn down.

During day time traveler walked around the city, listening to street musicians, but with the sunset he had to head back to the house.

- On my first night, I couldn't fall asleep. right after midnight I started hearing screams and shouts coming from the next door room. It was the master of the house who was shouting, and his voice was filled with rage and despair. From his words it was apparent that he was yelling at a little girl, most probably his daughter who was clearly too stunned to reply anything. At one point, I heard sounds of hits and blows. The bitterness, sadness and anger in nightmare king's tone made my heart sink. His rage didn't cool off until morning, but the girl never answered, and I was paralyzed by fear, so I couldn't intervene. just before dawn the shouting ceased, and I immidiately fell deeply asleep.

When he woke up the house was empty, no trace of either the girl, or her father. So the traveler went to explore the city again. It was already late at night when with a heavy heart he finally decided to return to the house. There was a swamp on his way that he barely noticed in the daylight, but now in complete darkness, it suddenly terrified him. He felt blood freezing in his veins, but still couldn't figure out why the swamp scared him so much - he just felt incredibly strong sense of danger coming from it. nevertheless, the only path to the house lied through the swamp, so he had to go. From afar he spotted strange shimmering lights and heard some weak moaning, but now when he came up close he discovered that the lights were in reality glistening eyes of some horrible unknown swamp creatures who were stretching their arms to touch him and drag him down. After seeing that the traveler started running as fast as he could, and soon was safely at the door. After this horrible event he doubted that there is anything inside the house that could scare him more, so upon reaching the bed he immidiately fell asleep.

- At 3 am I was woken up by hissing sounds. My first thought was that the nightmare king was probably beating his cat - I could expect this from him after his cruelty the other night. However, I didn't hear the man's voice. Meowling, on the other hand, wasn't stopping. after a while, these sounds started driving me insane. I could swear that among cat noises I started hearing moaning from the monstrous swamp. Cold sweat upon my brow, I jumped out of the bed, turned around - and suddenly saw a black cat sitting on the window seel behind the glass. It  was master's cat indeed, demanding to be let in. However, being not in the right mind instead of opening the window, I almost smashed it trying to get rid of the animal. The cat looked at me with the strange, shimmering like the swamp lights, eyes, and dissapeared into the night.

The traveler couldn't sleep until dawn. On his third day, he saw the knitmare king in a very good mood.

- Well, tomorrow you're leaving, my dear guest... would you like to dine with me?

Traveler politely declined. He couldn't wait to leave this place. he even forgot about the voodoo queen and why he started the whole endeavor. The third night was almost the same as the first - master of the house was shouting at his little daughter, who was still silent. By the first crack of dawn his rage became unbearable, so the traveler decided to quietely sneak out of the house and forget about this place as soon as possible. He caught a carriage that was headed out of town, and immidiately felt better. The driver asked him:

- How did you find our city? Were you staying somewhere nice?

- Your city is very peculiar, and as for my lodging - I was staying at the so called nightmare king's place.

- Ooh, have you seen the voodoo queen?

- Unfortunately, no. To be honest, I don't believe she could actually visit that place, not with the master being that cruel to his daughter, shouting and beating her every night...

- His daughter? - the driver looked confused, - but his daughter died 10 years ago. He went to the war, and one night while he was gone, on her way home she slipped from the path and drowned in the swamp.

The traveler fell silent, but the driver just continued chatting:

- Oh, by the way, since you didn't meet the queen, look at her house we're passing by now. that's her portrait on the wall...

The traveler froze. In the picture he saw a dark-haired woman with a black cat on her shoulder who had the eyes just like the swamp lights.
Powered by