Of a Red-haired Girl and the Sea Queen
by Mora 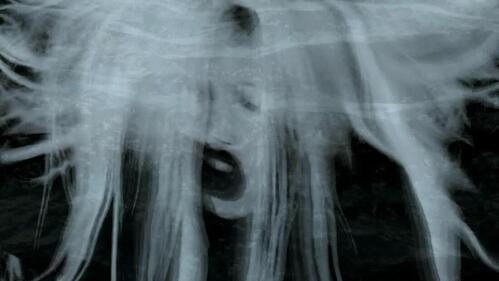 Once upon a time, there was a little red-haired girl who lost everything and wanted to seek the sea queen to find peace in her kingdom on the bottom of the river.

She heard that she could find the queen only at 3am in one of the channels in the beautiful city of Venice. She arrived to the city, found a channel and started waiting for all spectators to pass. When the time came, she began her decent. She couldn’t swim, so she assumed it would be easy for her to get to the bottom of the channel without putting up a fight with her own body. However, once she started her decent, she spotted a man on the boat rushing towards her. She couldn’t see his face, and his entire being looked almost transparent in the night air.

She was already halfway in the water, but hesitantly turned to him. Gosh, she missed smoking.

He gave her a welcoming gesture, making clear that if she wants a cigarette she needs to climb on board. Which she did. Once she was inside, he started the boat, constantly repeating:

They went through the beautiful channels and all the way out of the city. Suddenly there were no lights anymore, and they arrived at the strange place made out of darkness. He stopped the boat and lit a cigarette once more. The orange-red light of it was the only spot visible in the dark. The girl started to panic because she couldn’t see the border between water and sky anymore, and when she looked down, she saw the white face of the sea queen smiling at her. Instead of a beautiful and peaceful woman she imagined her to be, the queen was the most hideous creature ever.

The terror filled her veins and she screamed into the moonless night. The boatman laughed at her demands to take her back, but after a while agreed. They hugged at the shore and she promised to herself that she’ll never try to seek the sea queen again. When she came back and looked at herself she saw her bright red hair transformed into white very much like the sea queen she saw that night.