Of Roses and Black Holes
by Mora 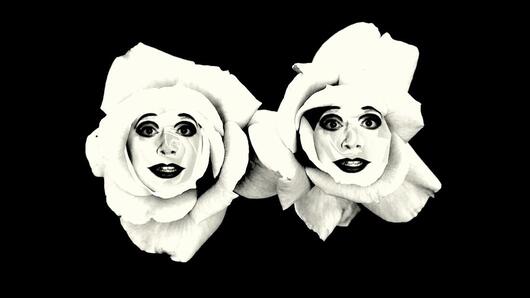 There were two Siamese twins born millions of years ago. They were floating through space, growing roses on abandoned planets in the middle of cosmic chaos. Eventually, they built a home on the edge of a black hole, so no one could ever find them. Every day they were balancing not to be sucked in, but enjoying every minute of it as they believed that nowhere peace felt more beautiful and fragile than on the border of destruction. Until one miserable day they got torn apart by a star storm. The black hole finally possessed them, settling in their chests and spreading them across the galaxy like petals.

One of the twins: I could see his eyes bleeding and burning from the explosion. I could see him moving away from me faster and faster. He was silent, struck by darkness, becoming a void. I made a promise to find him.

They met on Earth million years later. Memories hit her the first moment she saw him. He appeared in her life one lovely spring morning, late to the meeting, tiny, grey blob, barely noticeable in a crowd. He glanced at her, drew a breath, opened his mouth to say ‘hi’ – and there it was. She went through millions of past lives remembering their each first meeting, flew through myriad universes they shared, shaking stardust off her shoulders. He was inside her head now, her long lost siamise twin, and her body ached at the place of junction where they used to be sawed together. Only this time the separation was inevitable and incurable. The star explosion burnt his eyes and he couldn’t remember the way she looked when they fell apart. In this life he was more of a woman than she could ever be, and had a sweet prince of his own. They talked about million things saying the exact same words at the exact same time, but nothing seemed to wake up his memory. Only when she mentioned that she’s growing white roses something sparked in his eyes, and he fell silent, stunned and confused. After that, every time she would meet him she would bring roses in hope that he would remember who they were before.

Roses: At times it seemed it could actually work. I remember full moon, unremarkable small town. She was carrying us from the station, feverishly clinging to the hope that this time it might finally happen. Rushing to the theatre to enter first so she could hide us under her seat and no one would stare at her. In this life he was a star and her muse, so her plan was to give us to him after the show he was doing that night. She was clutching at us the entire performance not noticing thorns hurting her fingers and drops of blood dripping on our petals. When the curtain fell and the audience rose from their seats in blissfull need to show their gratitude, she flew to the stage, and in one painful heartbeat jumped onto the stage putting us in front of her face as to protect herself from looking at him. Something changed in his look, from shock to tenderness to what seemed like… recognition. In the heart of the stormy applause, surrounded by still present audience, he called her beautiful, in a weird, quiet and knowing way, as if he really just saw her for the first time. Stunned she tried to escape not daring to believe what she heard, but he caught her wrist and kissed her. Twice. As she was leaving the stage we saw her pressing her wrist to her face inhaling the scent of his lipstick on it and mumbling that now she’ll make herself ugly just to never be called beautiful by anyone else again. It seemed like there was still hope.

Their coffee meetings and art discussions lasted for a year. Sometimes she would see a spark of a memory in his eyes, but most of the time they just reflected sunshine. She knew that one day he will disappear from her life completely, and on that day her heart will turn into ashes. When that day came she was sitting on a bench near his house looking at his car parked outside. Tomorrow he would leave to a land where she’ll never find him again. So she was just sitting there, memorizing every detail, inhaling and exhaling damp winter air. Suddenly she felt the black hole in her chest starting growing larger and larger and beginning to take up all the space in her body transforming her into atoms of darkness, dissolving and reassembling her entire being. She woke up in an unfamiliar flat lying on the floor. She tried to rise, but couldn’t move at all. From the spot where she was lying she could see him sitting at his desk, drawing something. She wanted to scream, to run, to do something to attract his attention, to prove herself that she was still visible, still alive as she couldnt seem to see her hands or legs anymore. Suddenly, he turned around and stood with an uneasy nervous look on his face, glancing around and shivering as if he saw a ghost. She immediately found herself standing next to him, pressed to a wall. On the opposite wall she spotted a mirror with his reflection framed by a long black shadow. It took her a few seconds to realize that this shadow was her.

Shadow: I watch him now. Not all the time, but on the most shiny and happy days I’m there. And of course, I’m always there with him on stage, never stronger than in the brightest light of the spotlights, observing his audiences from behind his shoulder. Sometimes he becomes unsettled in my presence, looking deep into me, perhaps trying to remember, to connect with the only being in the universe that will stay with him forever.

Poem:
When I think of you
I think of star explosions
And white roses
Of endless nights, bad trips, and cigarette smoke
I remember you as a gaping crimson wound
On a white face
Made of pure beauty
When I look in your eyes
I see my body dead in the ground
I see myself dressed as Ophelia
I see the space between us forming a black hole
When I talk to you
Words choke me
And my body becomes a river
Where I want to drown you
When you talk to me
There is a hurricane somewhere in the world
Destroying villages
But in the absence of you
There is just
​
Powered by