Of a Yellow Rat
by Mora 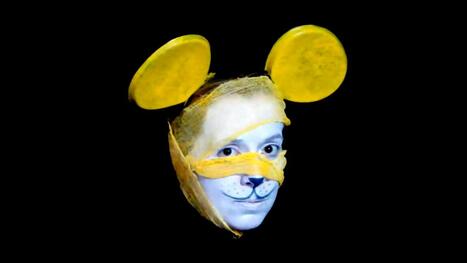 Once upon a time there was a yellow rat who always believed that she was special, because all the other rats she knew were either gray or white. She thought that it was great being yellow, as it was the color of the sun, bright and happy. And of course she never expected her color to get her in trouble one day. So she was calm and happy, until one friday morning she was found and kidnapped by a scientist.

- I've been scared of scientists with their big horrible tubes and syringes my entire life. When i was a child my mom used to tell my chilling stories about them abducting little rats who were naughty and didnt listen to their parents. But i've never actually met a real scientist. And why would he need a weird yellow rat like me? surely, they only take white pretty ones.

She passed out while being carried, but then woke up in a bright white room. Two scientists were towering over her - one of them chuckled manically, and the other one tried to say something meekly.

However, the other, menacing, scientist didn't agree, and instead lifted the rat and placed her in a weird long and narrow space, resembling a hall or a tube. the rat was very familiar with narrow spaces, so she began running forward without thinking. she was running and running, but there seemed to be no way out.

- Must be a maze. I heard those scientists like to put us into them and watch what we'd do. Maybe that's the entire experiment, and if i keep running i'll eventually find the way out and they'll let me go. In any case that's the only thing i can do.

So she continued running until over one of the corners she saw 2 sharp shiny blades blocking her way.

- Sharp blades! What am I to do? If i go through them, I'll get terribly hurt, but it's the only way forward.

She gathered all her inner strength and went through the knives. They hurt her tender skin terribly, and her tail got caught between the blades, so she lost half of it. But when it was over she didn't have time to feel sorry for herself, she knew she needed to keep running. So she ran for what seemed like days, without any food or water, but there was no exit in sight. Finally she got so tired, she decided to lie and rest for a while.  the moment she did it the evil scientist picked her up and stuck a needle in her side.

- That must be my death. Mother used to tell me what those evil scientists have in their shots.

But she didn't die, just got itchy all over, so she couldn't lie down anymore and had to run further. She didn't know how much time had past, and when she started to lose her last hope she was suddenly picked up by the not-so-evil second scientist.

- I'm sorry, my poor rat. Here, have some food and water. It's not long until the end, I promise.

His kindness encouraged her, so she continued running. And finally, finally, she saw the light in the end of the hallway. However the closer she got the clearer she realized that there was something else there.

- I see the ring of fire before the exit. It means that i'll most probably burn before i get the chance to escape, but there is no other way out, so i must try.

Without further hesitations she jumped through the burning hoop. For a moment she thought she went blind from pain and heat, but than somebody's hands picked her up and carried outside, where she could finally breathe some fresh air. That's when she knew she was free.

After some time, she gathered strenght and slowly walked to the nearest puddle to drink some water. she saw her reflection in the water - instead of her bright yellow fur there was nothing but patches of black.

- Oh well. So i'm a black rat now. It doesn't matter, i'm sure i'll learn to wear my new color with pride.

I have a phoenix trapped in my belly
It’s burning
Red and yellow hot flames
It’s screaming
Vibrations go down my spine
It’s spreading
his ashes all over my insides
It’s hurting
my flesh and my bones and my blood
But I am enduring
Its burning and screaming and hurting
Because I’m let in on a secret
That those are the steps
To our resurrection.