Of Filifjonk Who Believed in Disasters
by Tove Jansson 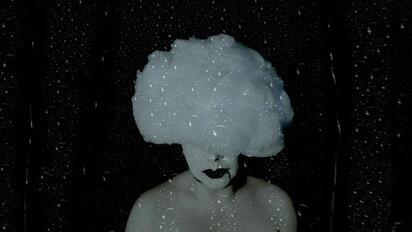 One lovely warm sunny morning Filifyonka was washing her carpet in the sea waves. She would always do her washing in the sea, as it helped colors keep and left a nice smell on everything. Surrounding calmness unnerved her, she felt like something terrible was about to happen.

Filifyonka lived in a dull and glum house on the seashore. She was tricked to rent it by a hemul who told her that her grandmother used to live here during summertime. Fili honored traditions, and thus decided to move in. The place was very lonely, far from anyone she knew and very much unlike the usual leafy, cozy and safe habitats of her kin. Any visits here were welcomed by her, even if the visitors weren’t among her favourite people. Today her old acquaintance Gaffsie promised to come by for tea, so Filifyonka was waiting for her anxiously.

Fili inner: No, I won’t look for her. I;ll wait for her to knock. Then I run and answer the door, and we both will be terribly delighted, and sociable, and have a good chat. If I look for her, perhaps the beach will be quite empty all the way to the lighthouse. Or else, I'll just see a tiny little spot coming, and I don't like watching things that draw nearer and nearer. Still worse would it be, wouldn't it, if the little spot was going the other way...

She and Gaffsie were drinking tea and trying to have a polite socially acceptable conversation, when fili started to feel fear creeping up her chest. She couldn’t bear it any longer and decided to share what was bothering her with Gaffsie.

Fili/cloud: This calm is unnatural. It means something terrible is going to happen. Dear Gaffsie, please believe me, we are so very small and insignificant, and so are our carpets and teacakes, and all the other things, you know... We are so very insignificant, and yet so important, but always threatened by this mercilessness. Yes, by mercilessness, by something one can't ask anything of, nor argue with, nor understand, and that never tells one anything. Something one can see drawing nearer through a black window pane, far away one the road, or far away at sea, growin and growins, but never really showing itself, until it's too late. Missis Gaffsie, have you felt it? Tell me, that you know what I'm talking about, please!

Gaffsie felt displeased with the tone of the conversation and tried to reason her friend with an example of her own – the wind recently carried away her washing which was pretty unpleasant to her. Fili interrupted.

Fili/cloud: You were talking about wind that carried off your washing, but I'm speaking about cyclons, tornados, whirlwinds, hurricanes, floodwaves that carry houses away. But most of all, I'm talking about myself and my fears, even if I know that it's not done. I know that everything will turn out badly. I think about it all the time. I think about even when I'm washing my carpet. Do you understand this? Do you feel the same way?

Gaffsie fed up with unpleasantness of this conversation, finally took her leave, and fili was left alone in her dark unfriendly house. The storm she was predicting started rising on the horizon.

Cloud/inner fili: Slowly her imagination started to picture a gale of its own, very much blacker and wilder than the one that was shaking her house. The nreakers grew to the great white dragons, a roaring tornado sucked up the sea like a black pillar on the horizon. A gleaming pillar that was ruching towards her, nearer and nearer. Those storms of her own were the worst ones. And deep down in her heart Filifjonk was just a little proud of her disasters that belonged to no one else.

When the feeling of forthcoming storm became unbearable and the house grew too frightening, fili stepped out of the window and towards the tornado.

Filidoll/fili: She had curled up behind the large boulder and was looking wide-eyed into the dark. She wasn't cold any longer, and the strange thing was - she suddenly felt quite safe. It was a very strange feeling, and she found it undescribably nice. But what was there to worry about? The disaster had come at last.

She saw hurricane passing by her and moving towards her house destroying everything in its way. It blew the rooftop away and carried all her precious knick-knacks she was so attached to away. But instead of despair she expected she felt incredibly relieved and happy.

Cloud/fili/ filidoll: How very wonderful! What can I do? A poor little Filifjonk against the powers of nature. What is there to mend and repair now? Nothing! All is washed clean and swept away. The tornado went solemly wandering off over the field, and she saw it taper off, break and dispearse. It wasn't needed anymore. The Filifjonk drew a deep breath. Now I'll never be afraid again. Now I am free. Now I can do anything.
Powered by